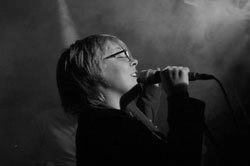 Офіційний сайт
Facebook
Soundcloud
Everything began from Alina's perseverance; she began the search for co-thinkers all around Kiev as soon as her last band "Bolshe chem Solntse" fell apart. It was a hard way with lots of disappointments to pass but after almost a year and a half "Singleton" was formed during 2004. Several members have been changed till finally the present quartet has been formed.

The main thing which got us all together was our love to music, especially different streams of Brit-pop and UK rock which inspires us a lot. At present we are in process of forming an original sound, which is tried to be reached by rehearsing, playing in clubs and making demo records. This site is supposed to be an instrument for presenting our music, thoughts, some information about us and also to receive feedbacks from our audience which may help us to find our way a bit faster.